Smirking out loud: The Diary of a Nobody @KingsHeadThtr 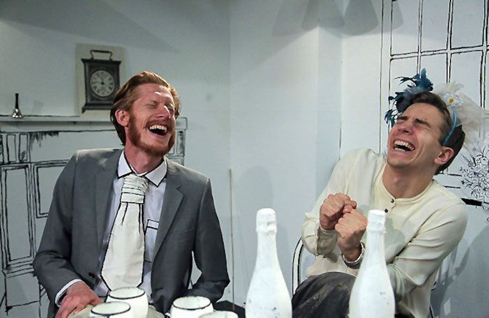 The Diary of A Nobody returns to the Kings Head Theatre for a short run over the next few weeks. Rough Haired Pointer’s reimagining of the classic Victorian lower middle class tale was a hit a few years back. First at the White Bear Theatre and then at the Kings Head.

But something seems amiss this time around. The comedy seems strained and the pacing a little slow. At best it elicits smirks out loud rather than belly laughs.

I recalled it being it funnier and full of energy, allowing you to overlook some of the more curious interpretations of the source material. This includes the decision to have an all-male cast play a range of female roles. 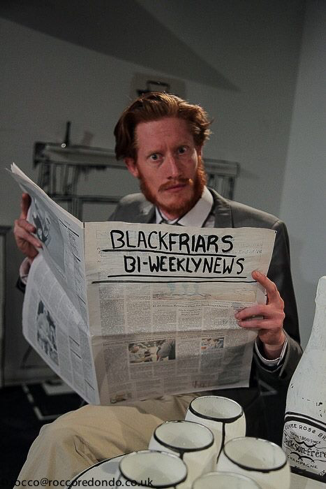 The Diary of A Nobody is a fictional diary of Charles Pooter (played by a deadpan Jake Curran). A clerk in late-Victorian London living in Holloway by the railway line. So the landlord gave him a discount. It’s a tale of trivial triumphs and social climbing with his wife and wayward son. There’s the run-ins with the maid and the ironmonger; the invitation to the meet the Lord Mayor and the champions of industry. No faux-pas or embarrassing encounter is overlooked.

There’s much to cover in this adaptation so characters run in and out, with only so much as a small hat to differentiate them. This means there there isn’t much time for character development. And taking things slower doesn’t help to bring it closer to the source material.

Still there are some nice touches in the piece. The production looks great with design inspired by the cartoons that accompanied the story when it was first published. And production company Rough Haired Pointer has a reputation for producing quirky and unique pieces of work. Too bad it seemed funnier before...

Directed by Mary Franklin, The Diary of A Nobody runs at the Kings Head Theatre until 18 November.