Panto at the sofa: The Legend of Moby Dick Whittington @wesleepingtrees

If you’re missing live theatre and missing live panto, Sleeping Trees have come up with an ingenious way to bring the spirit of panto season to your living room or your makeshift office (if you’re not casting it on television). The Legend of Moby Dick Whittington isn’t a show for couch potatoes either as you’ll find yourself throwing things at your telly or making a ship out of a sofa. And my household agreed that at fifty minutes long it has more laughs than series four of the Crown.

The premise is that Dick Whittington having defeated King Rat, is Mayor of London. And during his first Christmas Santa is eaten by a large white wale. And so with the help of Dr Arab, a marine biologist they find the Whale, and get out Santa and save Christmas.

Sleeping Trees have a history of turning traditional pantomimes on their head. Previous shows included Cinderella and the Beanstalk and Scrooge and the Seven Dwarves. Now with The Legend of Moby Dick Whittington, they can use the magic of recorded performance to make silly special effects and play multiple characters without the need for quick costume changes. 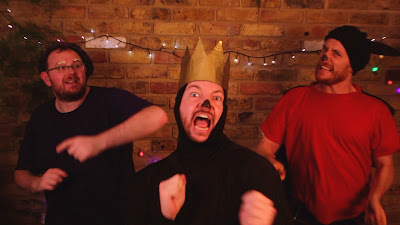 Watching Sleeping Trees live is hilarious. On a live stream, they have managed to convey the same energy and commitment to silliness. And this makes the humour, combined some inspired effects rather infectious. Even the most ambivalent pantomime viewers will be on their side by the time the battle on a remote island between a rat, a cat, Pinocchio, Dick Whittington and a dude at a coffee shop.

A show for all the family, regardless of its shape or size or age. And a bargain at just a fiver. Directed by Kerry Frampton and performed by James Dunnell-Smith, Joshua George Smith and John Woodburn as Sleeping Trees. The Legend of Moby Dick Whittington is available to stream from their website until 5 January. 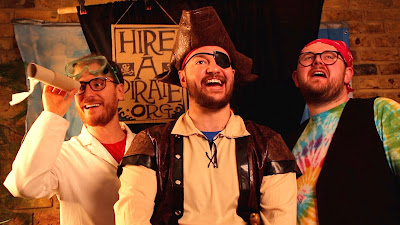